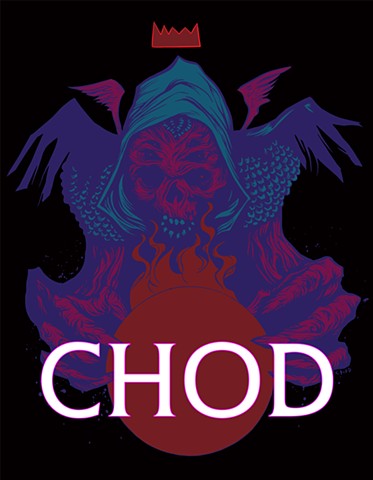 Chod’s earliest recollection of being affected by art was by a book of Grimm’s Fairy Tales Illustrated by Benvenuti. At three years old he would ask for “The Old Woman of the Mountains” to be read over and over. In the story there was an illustration of a girl’s skin draped over a branch of a tree. He remembers staring at it and noticing that it was so different from every other picture in all of his other books. Since that point Chod has always been drawn to the bit off. He tries to make sure that whatever he produces is something that the three year old in him would want to look at over and over again.

Chod works in a variety of media to keep fresh and to push the boundaries of his process. He touches on various subject matter with the main goal of producing something enjoyable and above all, something fun. And if it happens to have a monster in it, that is just a bonus.